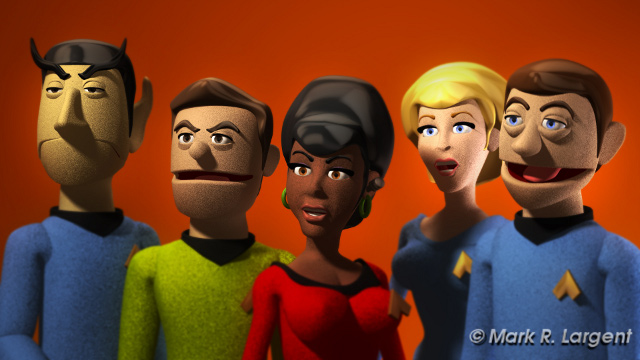 I like to visit the Animation Master forums to see if any of the users are working on any interesting or inspirational projects .

This one grabbed my attention and I felt that it was worth sharing with you on my blog.

Stalled Trek by Mark R. Largent is an animated parody of the original Star Trek television series created by the late Gene Roddenberry.

The visual style of Stalled Trek is a little reminiscent of something that you may have seen in The Muppet Show except that it is all digital.

Mark is having fun with producing this series and is tackling some of Star Trek’s classic episodes.

He hopes that fans of the show will enjoy it and have a few laughs while watching.

Stalled Trek will be released via The Paunk! Show as four episode season in April and then, afterwards, he plans on producing another season of episodes.

DVDs of the series will be available for sale online and at conventions after the season is complete.

You can watch the Pilot episode of Stalled Trek on Mark’s YouTube channel  or just click on the image below.