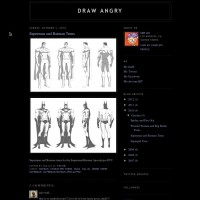 A few weeks ago I was doing a search on the internet for inspirational material  for a personal project that I am working on and I was diverted by something unrelated when I came across something called a character turn/ model sheet for Superman.

This particular character turn is located at a website called Draw Angry and it the site of an artist and director named Sam Liu (more information about him here as well).

Sam wrote in another post on his site that these model sheets were created for the Superman/Batman: Apocalypse video and that they were completed with the assistance of Jeff Johnson (more info here about Jeff Johnson as well).

I decided after looking at at the Superman sheet that I would would save a copy of it so that I could create a model of it in Animation Master, one of my computer and animations programs.

These images of Superman line up very well and have been a great help in modeling the character so far.

I have not finished modeling yet but I am almost finished.

Right now I am modeling the actual Superman character.  Then:

Here is an image of where I stand right now:

You may have noticed that I have already a texture map for Superman’s “S” on his chest.  Well I could not really wait for the end for that so I just put it on.  The “S” is not final yet since I’ll make a few minor changes to it before it’s done.

For any Animation: Master users that may be looking at this you might have also noticed that I have a skeleton in the model even though I mentioned earlier that I would not rig the model until the it was completed.

There really is a skeleton in the model right now but it is a simple one that I am using as a stand-in to  to test the deformations of the model’s mesh in certain areas (primarily the shoulder and thigh areas).

I’ll keep this post updated with my progress and if you have any questions or comments feel free to let me know in the comments section below. 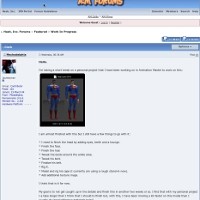 I posted my work in progress at the Animation Master Forums and got some positive feedback there.

I also got some valuable constructive criticism about the size of Superman’s head.

A few forum members mentioned that that his head is too small compared to the rest of his body.

I do agree with that.  In fact, I did not like the head’s proportions in relation to everything else from the very beginning and neither did any of my friends here at home when I asked them.

I decided to modify the size of the head to see what it would look like:

I like the larger size more than the original so I will stay with this new version for now on.  The head still looks a little small from certain angles and I tried making it even a little larger but it started to look silly to me (so I backed off from that).

Here is an update on the model so far:

Notable changes since the last update:

Items that I still need to address:

I thought that I would have finished this by now but I have not yet.  Oh well…

This is more of a rigging update:

I started out with no intention to animate this character but I have changed my mind.  For that reason I have spent a little more time on the rig than I would have if I were simply going to pose the model for still renders.

I decided to make a minor edit to the shoulder areas on the model’s mesh first because there was something about that area’s deformations during my initial testing that made me think that I should rework the spline layout there.

The rig that I am using is my own setup but it is HEAVILY influenced by the A:M 2008 Rig.

I am happy with what I have been able to do with the rig but I still have to clean up some of the model’s deformations with the Smartskin feature in Animation Master.  Smartskin in A:M is one of my favorite features in the program and maybe I’ll write more about why at a later time.

Since I’m confident that I will not need to edit the model’s mesh any further I have also started to add some texture maps to it (I did enlage Superman’s head again just a little more) .  I’m using Gimp 2.8 (check it out) to paint the texture maps.  So far I have only painted some of the muscle definition and added a basic color for the trunks.  I’m working on establishing a comfortable painting workflow and I think that how I am working now is a good start.

Here are a few pictures of some of my progress to date:

I still have not rigged the cape completely and that is why it looks the way it does right now.  After thinking about that and trying to figure out how to go about rigging it, I think that I will save the cape until the end of this project.

I will update this page with more progress later.

I’ve been posting my progress with this model on the Animation Master Forums as well but at this point I will stop posting there for awhile since my updates from this point on will be too minor to justify posting in two different places.

I’ll still be updating my progress here though.

At this point I am going to be focusing on animating this model so any updates from this point on will likely be about the animation.

Added another wireframe image as requested from the comments section:

4 thoughts on “Clark (work in progress)”